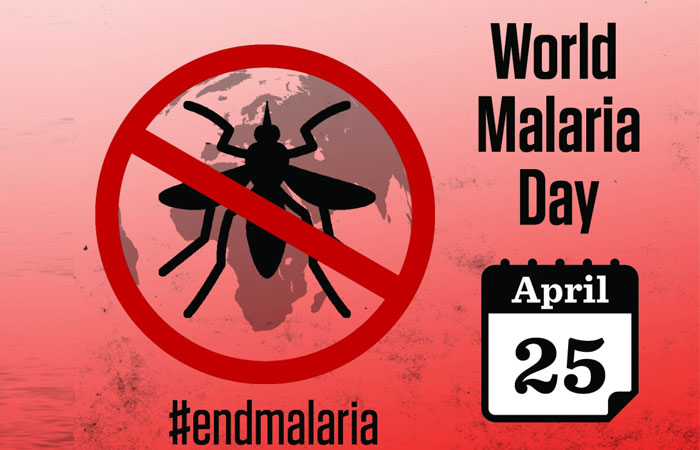 By: admin
In: Festival Special

World Malaria Day or World Malaria Day is held globally on April 25. Its aim is to raise awareness of one of the ten most deadly diseases of malaria so far. This disease primarily targets people in Africa, Asia, Central and South America and in the Middle East.

World Malaria Day is organized by the World Health Organization (WHO) and its purpose is to underline global efforts to cure, defend and ultimately eliminate this disease altogether. This year’s theme is – ‘Zero Malaria starts with me’, that is, starting to take malaria to zero level itself. It draws attention to continued cooperation, investment and commitment in the fight against malaria.

Malaria is a life-threatening vector-borne disease. This female spreads through the parasite by biting Anopheles mosquitoes, which is called “Malaria vectors”. According to WHO, 210 million cases were registered in 87 countries in 2017 and out of this 435,000 patients died. Of these, 92% of the cases and 93% of those killed were from the African region.

In India, however, the number of cases has decreased by 24%. According to the World Malaria Report 2018, it is less than 3 million compared to 2016. Only 4% of the world’s malaria patients are now in India. The number of malaria patients worldwide has declined continuously since 2010. However, it increased by 219 million in 2017.

Mosquitoes of malaria are mainly active in the evening and in the rainy season and in addition to their active transmission time, their activity is at peak. This disease affects men and women equally and there is also a great reason for deaths in children. It is fatal for infants, that is, for children under the age of 5 years, especially due to their low immunity. In 2006 approximately 2,85,000 children died due to malaria.

Although there are five species of plasmodium parasite, but not all are insecure. For those who are dangerous, they are:

The most common malaria parasite in Africa, and causes the death of the most in the world. This parasite grows rapidly. Due to this the serious damage to the blood and block blood vessels.

Sub-Saharan is found in the area of ​​Africa, especially in Asia and Latin America. This infection is usually dormant but after several months or years it has the ability to rise and to infect.

The symptoms of malaria are similar to the flu. But, in the case of malaria, it appears after 10 to 15 days of cutting. Some symptoms are as follows:

The symptoms in serious cases are as follows:

In cases of severe malaria in children, this leads to the loss of anemia, or several red blood cells, and also causes problems in breathing.

Some important steps to rescue:

There is no vaccine against malaria, but there are some anti-malaria medicines which can reduce the chances of getting sick. These are-

However, it should be taken only after consultation with a doctor, who will determine the exact dose and method of taking it.

The Government of India is taking all necessary steps to prevent and eliminate malaria. In 2017, the Union Health and Family Welfare Ministry launched a five-year national strategic plan for malaria eradication (2017-22), which aims to completely remove malaria by 2030. Out of 678 out of 578 districts, the goal of elimination of malaria is 2022. Sri Lanka, Paraguay, Uzbekistan, Maldives, Morocco, etc. are some countries which have declared malaria-free by the WHO for registering zero cases for three consecutive years.

2019-04-26
Previous Post: Reason to Problem in Children’s Digestive System
Next Post: 5 Ways to Bond with Your Partner at the Start of the Relationship