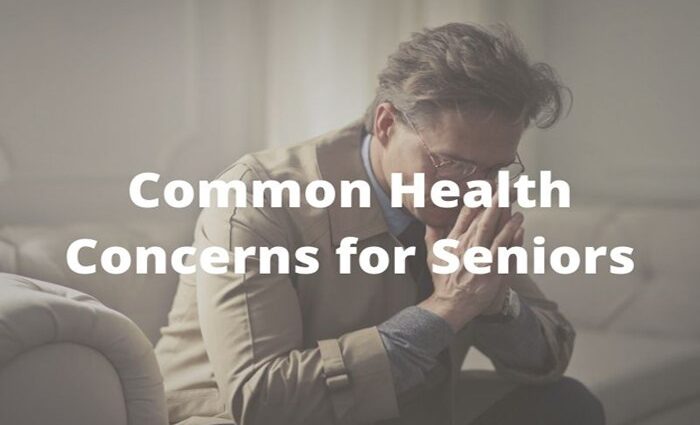 The Most Common Health Concerns for Seniors

Making healthy choices is essential for healthy living that helps you avoid senior health risks. While growing old may seem more of a depressing situation – hairs turning grey, wrinkles on the face, forgetting things, etc., it still is an important phase of your life given that you wouldn’t want to spend it on your bed. According to the Centers for Disease Control and Prevention (CDC), 41% of adults who are aged above 65 reports that they are in good or excellent health condition. However, planning for a healthy future is as vital as making financial plans for your future. As multiple health issues seem to take a toll on our health as we age, it becomes important to make certain lifestyle modifications that can help lead a healthy life at an older age as well.

Let’s take a look at some of the common health concerns that can occur in the elderly.

It is estimated that arthritis affects 49.7% of all adults over 65 and can lead to pain and a lower quality of life. It is the number one condition people over 65 struggle with. Although arthritis can discourage you from being active, it’s essential to reach out to a medical professional who can help with treatment and a personalized routine plan for you.

Heart disease is one of the major health concerns for adults aged 65 and above. It affects 37% of men and 26% of women and is accountable for roughly 490,000 deaths in 2014. As people age, the risk of developing health conditions such as high blood pressure and high cholesterol increases. These conditions have been known to be the contributing factors for heart disease. Thus, it can lead to stroke or cardiac arrest in some people. Doctors recommend taking a well-balanced diet, exercising regularly, and getting an adequate amount of sleep to ensure healthy heart health.

As per the WHO, around 15% of adults aged 60 and above suffer from a mental disorder such as depression. Depression is one of the most common mental disorders that affects 7% of the elderly population. Depression affects the immunity of a person and lowers the ability to fight infections. It also leads to other major health disorders as well. In the United States, over 18% of suicide deaths occur among the old age group. While medications can be helpful, seniors should be encouraged to indulge in a healthy lifestyle. They should interact socially more and increase physical activity.

While a majority of toothpaste might be misleading, healthy gums and teeth are not just important for a smile but also for overall health. Often overlooked, oral health issues are one of the most common ones in the elderly. And as CDC reports, around 25% of adults don’t have their natural teeth. This is such an eye-opening figure. As a person ages, the mouth tends to become dry and the person falls prey to cavities and bacterial infections such as periodontitis. Regular dental checkups should be made mandatory and every individual should see a dentist every six months.

As men age, certain physical conditions such as diabetes, obesity, high blood cholesterol, high blood pressure, etc. seem to take a toll on their health. These conditions often disrupt the flow of blood. As a result, a person falls prey to sexual health concerns such as erectile dysfunction (ED). He finds difficulty in maintaining and achieving an erection during intercourse. This often poses problems in his relationship. However, by following a healthy routine and taking medications such as Viagra 200mg (prescribed in severe cases), this problem can be treated effectively. For the blood to flow properly, the arteries and the blood vessels need to function properly. It is, therefore, recommended to eat healthy foods, workout regularly, and put an end to alcohol and smoking.

CDC reports that around 125,000 people died in 2014 due to chronic obstructive pulmonary disease. Respiratory issues are considered as the third most common cause of death in the old age group. Having a chronic respiratory disease makes you more vulnerable to other infections. Taking the right medications and getting routine checkups regularly can help preserve senior health.

Alzheimer’s is a progressive disorder that destroys a person’s memory and other vital mental functions. Since the diagnosis of this problem is challenging, it is difficult to report the actual figure of the population that might be suffering from Alzheimer’s. As per the CDC, 92,604 deaths took place in 2014 due to Alzheimer’s. It becomes important to see the early signs of Alzheimer’s and get the problem diagnosed timely so that proper treatment can slow down the progression of this disorder.

Since seniors are more vulnerable to infections due to their weakened immune systems, they’re likely to catch pneumonia or influenza. To prevent these infections, getting an annual flu shot or pneumonia vaccine should be considered if the doctor says so.

Since the body’s immune system tends to get weaker with age, it is essential to follow a healthy routine that consists of eating healthy foods, taking proper rest, exercising regularly, practicing mindfulness to eliminate stress, and taking your medications timely.

“Eating healthy foods and being in good shape doesn’t mean that you’re immune to health conditions. As you get older, your immune system weakens and it becomes the responsibility of every senior citizen to get a yearly flu shot from the doctor. Whether you’re 60 or 80, make sure you get a routine checkup done to ensure that there isn’t anything building up inside your body”, says William Henderson, a physician and health consultant at Hisblue.

While aging is a risk factor for the different conditions discussed above, it doesn’t necessarily mean that you’ll suffer from it. It’s only that the chances of experiencing these conditions increases as a person ages. Various research is being conducted to determine the effect of age on the human body – what all conditions come with age and how they can be prevented.