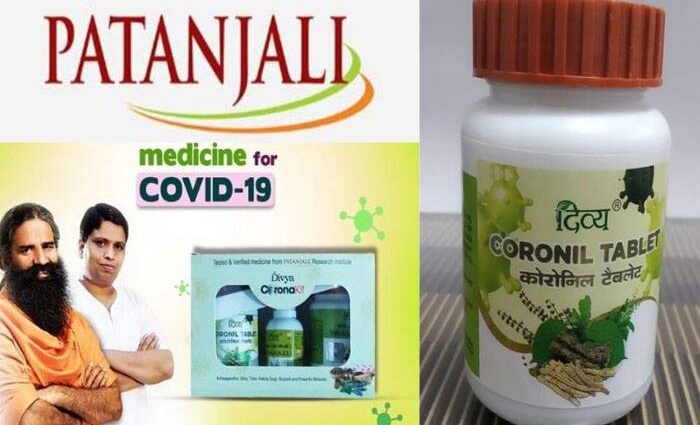 Today, everyone is suffering from Corona Virus, spread from China. Day by Day, the no. of cornavirus patients are increasing. Our government has do everything to save people of our country, but no any result. They have applied lockdown in all over India from March 22, 2020. Even, all the countries have not found its solution.

Ayurvedic products giant ‘Patanjali’ has launched a new drug Coronil on Tuesday. The company claimed that it is capable of treating the ayurvedic drug Coronovirus (COVID-19). Yoga guru, Swami Ramdev, while launching the medicine at a press conference at Patanjali’s headquarters in Haridwar, Uttarakhand, said the drug was launched after a clinical trial.

Patanjali CEO Acharya Balakrishna claimed earlier this month that a team of scientists were working to develop a medicinal compound that could treat Kovid-19. They claimed 100 percent favorable results in the test. However, the Ministry of AYUSH has prohibited the promotion of the drug till its investigation.

The two institutions did research together

Patanjali has stated that research on the drug of Corona was done by a joint team of the Patanjali Research Institute (PRI) and the National Institute of Medical Sciences (NIMS), Jaipur. The product is manufactured by Patanjali’s Divya Pharmacy.

Inaugurating the therapy, Ramdev said, “The whole world is waiting for someone to develop a drug of coronavirus. Today, we are proud that we have developed the first Ayurvedic medicine for coronovirus. It was named Coronil. is.”

Ramdev said, “We did a clinical trial on 100 patients. About 65 percent of them showed negative corona results within three days. While 100 percent of patients were completely free of corona within 7 days.

Ramdev has claimed that this drug has a 100 percent recovery rate and zero percent mortality. He has said that Patanjali has followed “all scientific rules” in developing this Ayurvedic medicine to treat Kovid-19 patients. The second trial of the drug will soon be done on serious patients.

According to Swami Ramdev, a total of 3 Ayurvedic medicines for corona virus have been launched. In addition to Divya Coronil tablets, inhaled butts and atomic oils, which have been asked to be used together.

2020-06-24
Previous Post: Why Kariong Dental is not a Preferred Provider?
Next Post: Risk About Eat Food in a Restaurant During Coronavirus